I consider her to be a most important rediscovery.

Her name is “clitoris”, a hugely important pleasure treasure who’s holistic intelligence, secrets, SIZE, and potential for saving one’s sanity has been cruelly banished and kept out for way too long. Along with the female cycle and the VaJayJay, she is yet another locked-away, buried, code of female conduct and function which is finally being unearthed by one interesting author, artist, or everyday woman-after-another in the ongoing effort to reveal the authentic and powerful female—one’s true state of being. 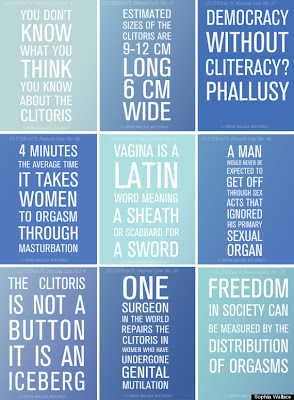 Sure, anyone who knows anything at all about lovemaking knows to touch, lubricate, rub, massage, lick, or suck the clit. Sometimes it leads to orgasm and sometimes it doesn’t. Certainly and thankfully there are lovers out there who have it going on in this regard, but it’s more than this. We women want more information and sexual equality. We are very interested in knowing exactly how big that thing inside of us is and the role it plays in not only pleasure and orgasm, but bringing respect and happiness back into the lives of women globally.

In her Ted Talk, Nicole Daedone let’s us know that orgasm through clit attention is the Cure for Hunger in the Western Woman. Mary Roach tells us 10 Things We Didn’t Know About Orgasm. Mara Altman goes on a vision quest for the Big O.

And now artist, Sophia Wallace, is getting visual.  She wants you to be Cliterate.

Aptly entitled “Cliteracy,” the project, which is ongoing, includes Wallace’s “100 Laws of Cliteracy,” street art about the organ, as well as a “clit rodeo” that involves an interactive installment of a giant golden clitoris. *

The Clitoris’s true potential is not only rarely utilized or focused on, but there seems to be an equal amount of derogatory excuses of why it just isn’t worth the bother, which in turn, tells us that pleasuring women in life is not worth the bother. Worse though, are cultural and societal attitudes and  practices that eliminate the clit altogether in order to eliminate the pleasure of the woman altogether in order to control her behavior altogether. Metaphorically, the elimination of the clitoris can be experienced all around us where women are sexually portrayed virtually everywhere in the media to sell almost every thing, but are ultimately, personally de-feminized in their equal entitlement to sexual pleasure.

Even though the mostly hidden clitoris is often longer than a not-erect penis, it doesn’t take a genius to note the societal preference given to making sure men are sexually satiated because they “need it” and the presumption that women don’t really care about sex all that much. Take Las Vegas for example (or any other place in the world for that matter). It’s easy for men to buy sexual release and touch if they need it (whether it’s low or high end prostitution), but if you’re a woman? Forget it. The general population believes women would never do such a thing and that we have no such needs. It’s not only ridiculous, but it keeps women feeling lonely, sexually frustrated, not valued, and untouchable. Physically, psychologically, emotionally, or metaphorically, it’s all cruelty toward women and violence against them no matter which way you look at it. And this is what Sophia Wallace is speaking the truth about with her Cliteracy project..

The Clitoris. It’s not enough to know you have one. Claiming Your Clit is yet one more important step to claiming and integrating your female sexuality into your entire holistic and authentic self and knowing what you deserve.

We’ve only begun, in recent years, talking about the clitoris, orgasm, the female cycle, menopause, and the vagina. Next up: I want to see the world discover a treasured, sacred feminine recipe for reliable contraception, or see created, a form of the birth control pill that is actually good for the female and keeps her hormonal rhythm in tact. For the same reasons these other sexually focused features were excluded from importance and power, finding holistically good-for-the-woman contraception through ancient wisdom or current super science is not coming along quickly.  I know it is out there, but I think unfortunately, it will first take believing that women deserve sovereignty over their female bodies and lives before sincere action will be taken.

“Reproduction really translates to sex and creation. Both can be sacred, and both can be exploited. Both are controversial,and so are women because of them.” ~ 4 Seasons in 4 Weeks: Awakening the Power, Wisdom, and Beauty in Every Woman’s Nature, page xxii

Any cookies that may not be particularly necessary for the website to function and is used specifically to collect user personal data via analytics, ads, other embedded contents are termed as non-necessary cookies. It is mandatory to procure user consent prior to running these cookies on your website.